I’M NOT DRIVING FAST – I’M FLYING LOW! Since our first posting we have accelerated our race and mileage to a pace that has not given time for posting. Being married to Rodney means living a life beyond normal as he lives up to the sticker on our land cruiser…….. I’M NOT DRIVING FAST I’M FLYING LOW!
7th January we left Zimbabwe early in the morning, arriving at Inhaminga late afternoon. Passing through Gorongosa Town we saw some of the refugees we had been hearing about on the news. We did not believe to see the day when fighting would again erupt in Mozambique after twenty years of peace.

REFUGEES: Very sad to pass the empty homes at Canda and surrounding places where people have been moved by government to Gorongosa as they live in rebel held areas, many of them being supporters of the rebels. Some went willingly, most involuntarily.

MIGHTY MEN: So wonderful to be back at Inhaminga. It is green and lush at this time of the year. Great to meet with Team, Rod has a lot of work to catch up on and spent time with Pastors Mariano and Lino catching up and planning.

APOSTOLIC CONFERENCE INHAMINGA: 14th January started with our long awaited three day Team and Key Leadership Conference. A powerfully anointed time of Word, prayer and equipping for the year ahead. We are full of passion and vision for this year, believing to accomplish more than ever before.

JEMUSSE RECEIVES MOTORCYCLE: On the final night Jemusse, leader of evangelism received a motor cycle from friends in Mississippi who have joined with us in a tremendous project of giving wheels to leaders who cover long distances to spread the gospel and visit churches. Such excitement and rejoicing from the rest of the group to see Jemusse blessed in this way. They carried on dancing, shouting praise to God, picking him up and carrying him around forever. Great fun!
Together with this project we are giving bibles to our various churches scattered across the nation. blankets and cloth wraps for women who have lost their homes due to the present unrest. Many people have had their homes burnt, crops burned in a ‘scorched earth’ policy to try and break the support for the rebels. Tragic to know so many have/are being raped, beaten and killed.

ELIAS RECEIVES BICYCLE AT NDORO: 15th January Rod set off for Chimoio 04:00am, getting to bed 02:00am the next morning. This was a BIG day of blessing. On the way he stopped at Ndoro to give a bicycle to Elias who graduated from Bible School last year. 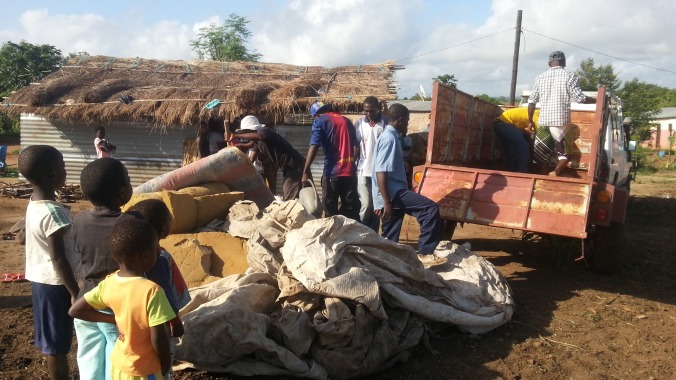 BUILDING SUPPLIES: The cruiser and trailer was full of people and building supplies. The team would make bricks as well as evangelise the area as well as work with the refugees. They were bubbling over with expectation.

GORONGOSA CHURCH GROUP: At Gorongosa God is doing a tremendous work. Last year Rod received direction that we should send a team to evangelise there. It was so successful that we determined to look for land and build a church. We had no idea that this would become a hotbed of unrest with much fighting just a few kilometres away. God knew what was coming and Rod moved in obedience. We have purchased a big piece of land, planted four poles with roof sheets to act as a temporary church which rapidly was too small. We increased it and it is too small again….it takes a long time to make bricks and build a big church but we are doing it as fast as possible while also building in Marromeu, Nacavala and Quelimane!

LINO’S SMASHED CAR: Lino smashed his car some weeks ago, he and Rod had to get it to Chimoio where it has been left for repair. Praise God Lino and four passengers were unhurt when he rolled it. The cost to fix it is big but AWYesu team and some of the leaders are pooling their resources to get it fixed. We are thrilled about this as it is good for needs to be met from within the ministry. What a great bunch of people we have, full of faith, vision and ready to give!
After very few hours’ sleep after Rod’s return to Inhaminga, we started off on the next leg of our amazing race to Nampula and Nacala………We are in Nacala now with lots of news and pictures and while in the midst of yet another three day conference for key leaders in Northern Mozambique, we shall find time with the help of Deborah (our youngest daughter) to share with you some fun stuff as we continue our AMAZING RACE!