Included in the list of ‘Great Women of the World’, alongside Joan of Arc, Cleopatra, Nefertiti, Catherine the Great, Indira Gandhi and other powerfully influential women, Golda Meir is one of my personal favourites. When asked if she ever wanted to be Prime Minister of Israel, she said, “No, I would have preferred to live always in the kibbutz. But just like my milkman who never chose to be a commander of a machine gun unit, we had to do what was needed.”

As we run our race, there are always those who have run further, longer and faster than us. There are also those who run slower than us. In this life we are all on a journey. Let us run our best………let us be ready to stop and help others that stumble and fall, let us cheer the winners and let us encourage one another to complete our amazing race …….. 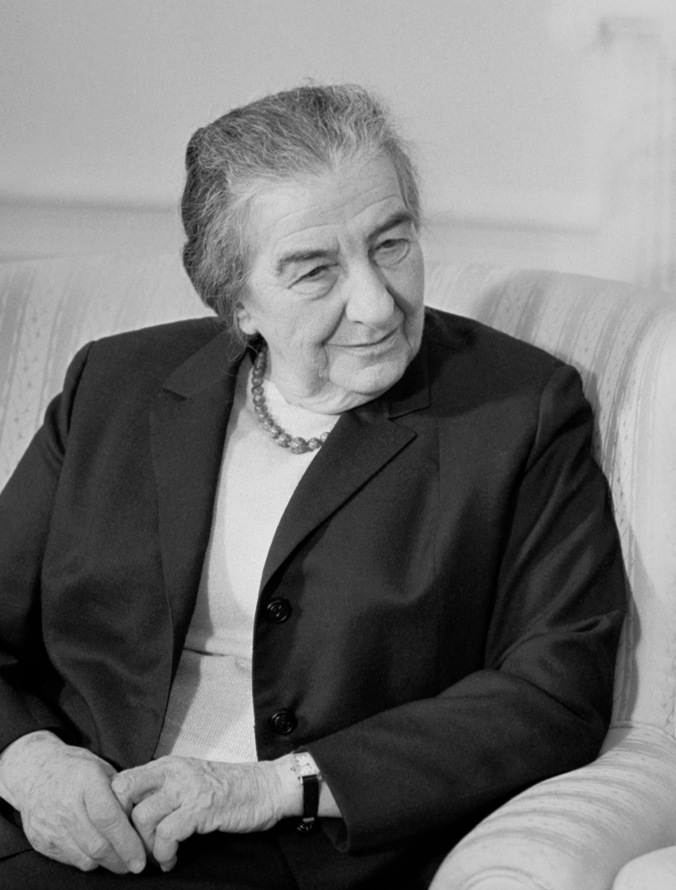 GOLDA MEIR – ONE OF THE MOST POWERFUL WOMEN IN THE WORLD

Golda Meir was called out of retirement, at the age of 70, to become the new prime minister of Israel. She was the Iron Lady of Israeli politics years before the epithet was coined for Margaret Thatcher.

David Ben Gurion (first PM of newly formed State of Israel), once described her as “the only man in the Cabinet.”

In 1948, she was part of the People’s Council signing the vital proclamation establishing the State of Israel. This Jewish woman grew up in Russia, lived a hard life, survived Hitler’s holocaust to greatly impact the world, a tool of world politics in the hand of God. It has been written of her – If Greatness is given a name, it surely is Golda Meir.

Her commitment to her land and to her people was the paragon of human dedication. Her complete involvement, tempered with love, fired by fierce devotion, caused the world to know that she was a true mover of mountains. Her dedication to her country and her personal concern for all people are legendary. Whatever Golda Meir did, she did for the people.

Israel was living in complete military victory. Golda Meir said, “We don’t thrive on military acts. We do them because we have to, and thank God we are efficient.”

She also said, “We do not rejoice in victories. We rejoice when a new kind of cotton is grown and when strawberries bloom in Israel.” This shows her woman side.

She did not delight in war but in the production of produce, the blooming of the desert.

She decried the loss of life, yet she sent the sons of Israel into battle as was needed.

“A leader who doesn’t hesitate before he sends his nation into battle is not fit to be a leader.”

ONE OF THE HARDEST DAYS IN HER LIFE was October 6, 1973 – the beginning of the Yom Kippur War. The government was severely criticized for the fact that the country had been caught napping by its Arab enemies. Much of the blame was directed at Golda Meir. It was a great tragedy for her. What happened? Did she move in response to the emotions of a woman, giving place to this defeat?

On this fateful day of October 6, 1973, Yom Kippur (the Day of Atonement), the holiest day on the Jewish religious calendar, Egypt and Syria took advantage of optimal circumstances to launch attacks that took Israel by surprise. So complete was the element of surprise that when war erupted, Israel was only beginning to mobilize the reserve forces which form the bulk of the IDF. The thin forces stationed along the two fronts had to contain the invading armies until the IDF was prepared to meet them in force. The IAF was hampered by the dense anti-aircraft missile system which the enemy had deployed close to the front. Egyptian forces succeeded in crossing the Canal and establishing beachheads on the Israeli-held east bank. On the Golan Heights, the Syrians pushed past the cease-fire lines and occupied a large area. They also seized the key Israeli intelligence- gathering position high on Mt. Hermon.

WHY WERE THERE SO FEW SOLDIERS ON THE GROUND?

Some years ago a movie on the life of Golda Meir was made; ‘A Woman Called Golda’, starring Ingrid Bergman. I absolutely love that movie. Whether the movie is strictly accurate or not, I don’t know, but it does portray the woman heart of an Iron Lady, and how our emotional side as women can be our victory, and sometimes our defeat.

The following quote shows the heart of Golda.

SHE WAS A SMART LADY. When America refused to give Israel the missiles she needed, Golda used her feminine tactics. Instead of conducting a visit from American delegates in the customary rigid government setting, she invited them to her personal residence. She entertained American and Israeli ministers in her living room and served her favourite honey cake. When the American envoy commented how good the honey cake was, she invited him into the kitchen to show him the old family recipe book (I forget the exact details but it was something like that.) Her Israeli ministers looked most disapproving when she shooed them away and sat in the kitchen with the American and gave him some of her honey cake. Right there she brokered a deal with him and secured the help Israel so badly needed from America.

ONLY A WOMAN COULD DO THAT!

She was also a mother. She allowed her mother heart to cloud her judgment concerning the Day of Atonement when all Israeli families love to be together. Mothers were writing letters to her saying they wanted their sons home for this important time. Lulled by a false sense of security, and with the emotions of a woman and not of a Prime Minister, she said ‘Let the boys go home.’

Soldiers were thin on the ground and when the alarm was sounded, she could not mobilize men fast enough back into position. She conducted military affairs with her heart and not her head, and she wept with her whole heart.

This was the hardest day of her life and she retired from politics not long after.

In spite of this mistake, she was the leader Israel needed. She was 70 when she took office; she came out of retirement to take office. She also discovered at that time that she had cancer, but she told nobody and gave herself, the best of herself for her country, that tiny nation of Israel.

On the men/women issue she said, ‘Whether women are better than men I cannot say – but I can say they are certainly no worse.’

And….’To be successful, a woman has to be much better at her job than a man.’

The Apostle Paul speaks of the equality of men and women.

It’s not about women being hard as iron, rigid, austere and unrelenting, but it’s about us all sharpening each other, and sharpening the world;

‘As iron sharpens iron, So a man sharpens the countenance of his friend.’ (Pro 27:17)

MY CONCLUSION – WE NEED BOTH MEN AND WOMEN IN POWER, IT IS THE NEEDED BALANCE.

MY GRATITUDE – To the man I married, who is man enough to allow me to be all I need to be!

‘Trust yourself. Create the kind of self that you will be happy to live with all your life. Make the most of yourself by fanning the tiny, inner sparks of possibility into flames of achievement.’

‘I must govern the clock, not be governed by it.’

‘We do not rejoice in war victories. We rejoice when a new kind of cotton is grown and when strawberries bloom in Israel.’

One thought on “OUR AMAZING RACE… She was described as: “The only man in the cabinet.””